Looking for a course? Check out our online brochure of courses in Italian Studies.
Click to see courses! 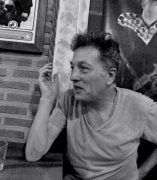 Originally from the UK Steven Marsh is a specialist on Spanish film. Before coming to the US he lived in Madrid for many years. He is the author of two monographs and an edited anthology. He is currently writing two books: one on contemporary Spanish politics (provisionally titled "The Rule of Law in the Age of Crisis: Judicial Politics, the Left, and the Case for Radical Justice in Contemporary Spain"), the other on filmic form in the work of Spanish, Portuguese and Latin American filmmakers.

Popular Spanish Film Under Franco: Comedy and the Weakening of the State

“Missing a Beat: Syncopated Rhythms and Subterranean Subjects in the Spectral Economy of Volver“