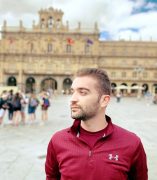 Víctor is originally from Ávila, Spain but his professional career has led him to live in different parts of the world. Vic earned his B.A. in English Studies from the University of Salamanca in 2016 where he was awarded a scholarship to study abroad at Universität Leipzig (Germany) in 2014-2015. He came to the United States in 2017 in order to complete his master in Languages, Literatures, and Cultures at Illinois State University where he was not only granted with the charter department award for Excellence but he also served as a president of the chapter Eta Upsilon, the National Collegiate Hispanic Honor Society. In his M.A thesis: “The surrealistic triangle: common symbols in the works Lorca, Dalí and Buñuel” he explored the surrealist movement by creating connections between literature and visual art. Víctor is currently working on a Ph.D. in Hispanic Studies at University of Illinois at Chicago. His research interests cover late 19th century and 20th century Iberian literature; gender, sexuality and national identity; historical memory and monuments. He is highly interested in analyzing the impact of the Spanish Civil war in Spain focusing on the “Ley Memoria Histórica” that is currently being debated in the Iberian Peninsula with different political powers removing monuments and cultural artifacts that detail the regime of Franco.