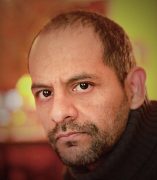 José Ángel Navejas is the author of Illegal: Reflections of an Undocumented Immigrant, an autobiographical work that has been widely adopted as reading requirement in universities throughout the United States for courses ranging from literature to Latino studies and sociology. In 2019, the Spanish version of Illegal became the first book translated by the University of Illinois Press in its 100-year history. Among other distinctions, Illegal has been chosen by the Illinois Program for Research in the Humanities for its Illinois Reads Program (2018), the Freshmen Common Read at Cal-State, East Bay (2016-17), and the Moraine Valley Community College One Book One College program (2015). José Ángel has spoken on the plight of the undocumented at venues such as the Chicago Humanities Festival (2015), City of Asylum Pittsburgh (2017), as well as before academic audiences. He was Scholar in Residence at Monmouth College (2014), delivered the Dean's Diversity Lecture at the University of Illinois Urbana-Champaign (2017), and has been invited to speak at the University of Notre Dame (2019), Princeton (2018), Northwestern (2014-2015), and the University of Chicago (2015), among many others. In addition to Illegal, José Ángel has edited Palabras migrantes: 10 ensayistas mexican@s de Chicago (2018). He is also the author of Invierno (2019) and Un mojado en Chicago y tres discursos inaugurales (forthcoming in 2020).

José Ángel is currently completing a dissertation on a group of Spanish-language Latin American writers in Chicago.